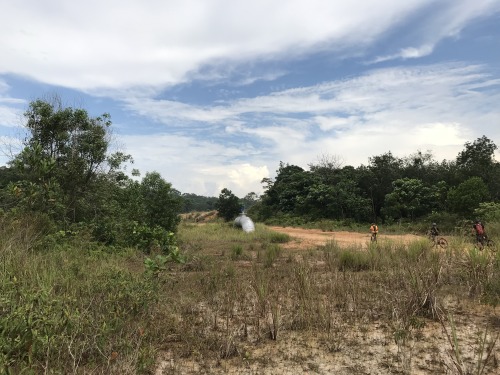 Pakcik Yuzaini and friends led this illustrious community of mud and sweat loving individuals to an early start around the outskirts of KLIA for the 286# hash. Still thundering and lightning at the horizon and swimming-pools of water still on the ground Dato Johan assured us that this would promise to be even more fun – and so it was. Already here a big thank you to all hares for a great day out in best Malaysian riding tradition through plantation dwellings, single track and Kampung.

However before we hit the “On-on” let me quickly remind you about our upcoming KLMBH annual lunch, which is held at Cobra club this year and quite easy to reach. From the (trail) head simply follow the snail pattern to the next bend from where you can already see the next bend in the other direction and so on…though we might be more interested in crawling the way out after all that free flow….Thank you, Caesar.

Let me continue to report that any death and mud defying rumors of about only three checks, a horrendous “no-choice policy” of only one loop option and certainly no falsies were greatly exaggerated as by day’s end about 45 MTB activists proudly reported breaking a check the first time, doing multiple loops ranging from 12 to 45 km in various orders depending largely on mud depth and personal believe.

On the first “on-on” the thin cut paper – or should I rather say thinly cut paper - guided us over open karst hard bed into plantation, where much of us were restaging groundhog day, “oh, hello again!?!”. GPS savvy individuals were competing for fellow-and leadership with traditionalists, who were promoting the old wisdom that if lost, just follow paper. With one of the leading packs breaking check #2 out of 45 before check #1 is but a small numerical detail, but led to some truly underground mud episodes of above mentioned little animal. 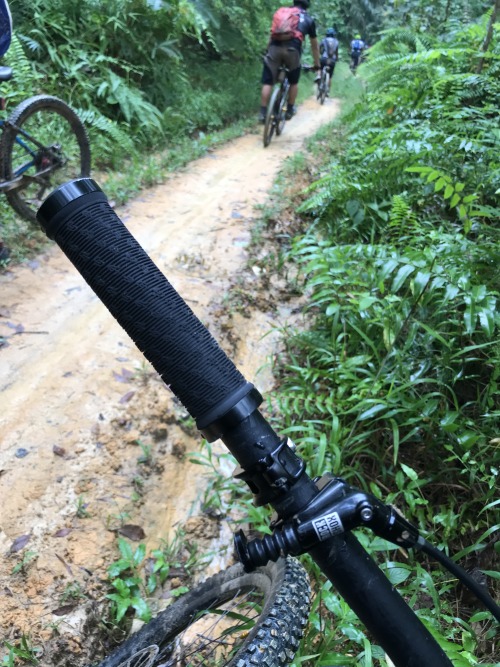 Some personal technical difficulties were providing me with additional weight on the ground and more  mud inside the tire than on the outside (thanks to Chi for the tube). Luckily this episode eventually did not prevent me from successfully finding my way out of the mud maze – a privilege, which not all of us enjoyed and are probably still circling in groundhog mode to this day.

Whether it was satellites or “stay on paper”, either one proved the right strategy to eventually venture onto flowy singly trails between thick rubber jungle. And flowy it surely was, not only the water in my shoes.  Out in the open we were greeted by the welcoming grin of Dato Johan putting out some freshly shred for our continued re-assurance being on the right trail. Not long after though the paper was becoming scarce, and a tiny paper sprinkle led our fate-and fortune bound ad hoc riding group up a cruel hill under the meanwhile blistering sun. Arriving dehydrated at the top our paper fortune ran out and we realized that we were tricked by a 95%-broken falsie. Ahh, this explained the little 5% paper trickle! Back-track! Down again our guardian angel Johan pointed us back into the leafy green. 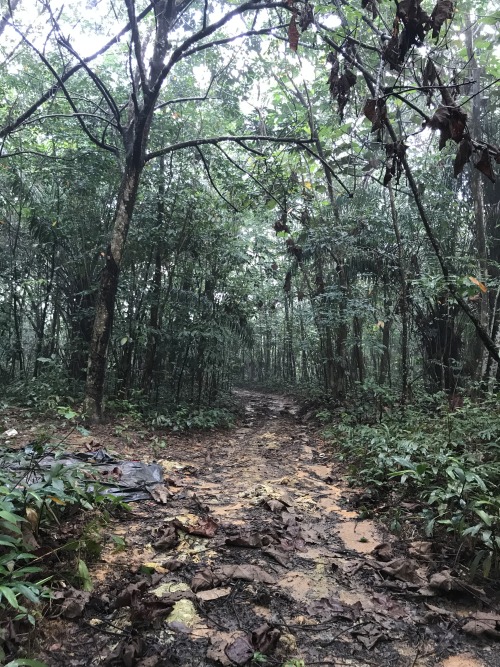 From here it was all single track, painting the third mud layer on our faces and bikes, drying off on the last stretches of Kampung and compound open road before homing in on target. Ahh, beer. Thank you, Tarik for guarding the camp!

Once again a big muddy grin and thank you to the hares!